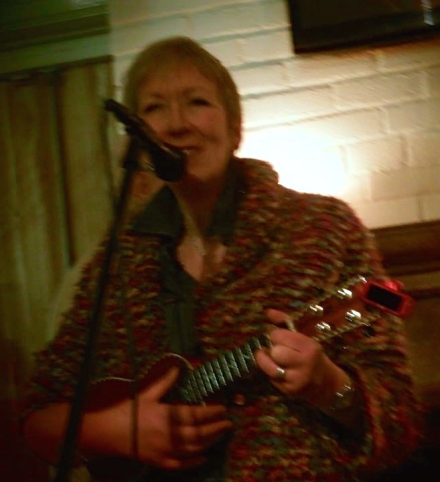 So how could I expect anyone else to spell it?

I was “Ukulele Allsorts” too – so much easier to spell.

So I will be moving all this stuff over to http://ukulele-allsorts.com/

Gary Lang sent me the audio recording of the set and the photos were taken by Cath Tyler and Jeff Moore.  A great night! 14 June 2014 to be precise.

I have already written about it here with the photos and two practice recordings (just me, no elephant emulators or keyboards!):

“I Know Where Syd Barrett Lived” – well now I do! @starandshadow

Many thanks again to Gary Lang of St. James Infirmary! 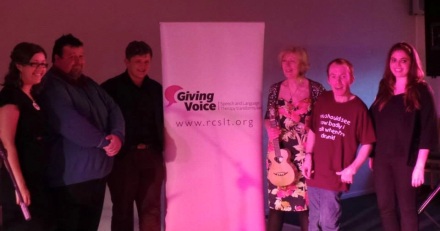 Fantastic charity night at Ashington Football Club on 7 June organised by Julie Ann Carr! Julie raised over £750 for NETA (North East Trust for Aphasia) and brought that up to £1,000 with her other fundraising activities!

The stars of the show:

Julie and Janet started off the evening by talking about NETA, about the Giving Voice UK and ICP2014 (International Communication Project 2014) campaigns.

My contribution was to bridge the information-giving and entertainment parts of the evening with my “Giving Voice” ukulele song.  (See previous blog post: May 2014 – International Communication Project Month of Action #ICP2014 #ukulele). 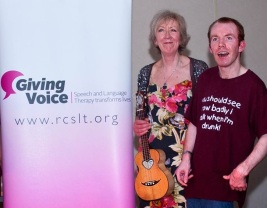 I keep meaning to write about my own recent experience of mild aphasia and more than usual general slow-wittedness. This was due to the combined effects of severe sepsis that led to a heart attack, a period of TIAs (transient ischaemic attacks aka mini-strokes), three operations under general anaesthetic in three days and much morphine to kill the pain. The effects of a TIA are short-lived so I imagine the main reasons were the after-effects of the general anaesthetic and post-sepsis syndrome.

Janet’s presentation was a reminder of my own efforts not so very long ago. My word-finding problems have almost resolved and I am nearly, but not quite, back up to speed. I still need to sleep a lot.  If I do not then I slow down and get a bit befuddled until I catch up again.

My life was saved last October/November at the RVI (Newcastle’s Royal Victoria Infirmary).  I was already confused and was very ill before I went in.  For several months afterwards it felt like my brain was a bucket of treacle. Constructing a sentence was a slow and conscious activity, a laboured process of dredging individual words like rusty old nuts and bolts from the murky, viscous depths. Most often, a word eluded me altogether. Sometimes the wrong word materialised, a near miss, not quite on target.

END_OF_DOCUMENT_TOKEN_TO_BE_REPLACED

The International Communication Project 2014 (ICP2014) aims to spread the word about the vital importance of communication to all aspects of our lives and the critical difference that communication professionals can make – especially when they are involved early.

The Giving Voice UK Campaign has been running since 2011.

This is a song I wrote for the campaign in 2011.  I was thrilled when Julie Carr used it as the soundtrack for her video of the “Giving Voice Communication Chain” event that she organised on The Tyne Millennium Bridge!

Julie Carr SLT is running another NETA Fundraising Event starring Lost Voice Guy! A chance to laugh yourself silly in a good cause!

Julie has kindly asked me to do my “Giving Voice” ukulele song again at this event too.

Had great fun doing it the last time – can’t believe it was nearly two years ago!

This explains why, having started this blog, there has been so little blog-action over the past few months. Getting back on my feet now and uking as if my life depended on it! Maybe it does . . ?

“Softly You Run”: In memory of Mickey by Liz Panton (aka Ms Mousette)

True story – names and locations changed ever so slightly to protect the guilty!

Very pleased with myself that I managed to write it the morning of 1st January 2013 and then performed it the same afternoon at Strings Attached Folk Club – a good start to the New Year. I didn’t have much time to think about the music though so I just did it in C, F and G that time.
END_OF_DOCUMENT_TOKEN_TO_BE_REPLACED

Ukelear Radiation . . . what a brilliant stage name / band name – and nobody else seems to be using it . . . so here goes!

Many thanks to Stan Tunstall-Otterburn aka The Durham Ranger aka The Joculator for including this image in his video of me performing “Heart and Soul” by Sheedy Frost at the Fourth Flash Folk Gathering North East:

The other two images that I added are stills from Stan’s video.

END_OF_DOCUMENT_TOKEN_TO_BE_REPLACED

Unauthorized use and/or duplication of this material without express and written permission from this blog’s author and/or owner is strictly prohibited.

Excerpts and links may be used, provided that full and clear credit is given to Liz Panton and Ukelear Radiation with appropriate and specific direction to the original content.

If you see adverts on this site, they have been placed there by Wordpress.com - not by me. I have no control over which adverts are placed.

The adverts vary all the time so I have no idea what you might see. However, Wordpress.com tries to ensure that adverts are relevant to the content of individual blogs.

Please do not assume that I endorse any of the products or services advertised - it is impossible for me to know what they are.

All In Good Time

A place to reflect on ukuleles and ukulele reviews

See the world through the eyes of a traveling ukulele.